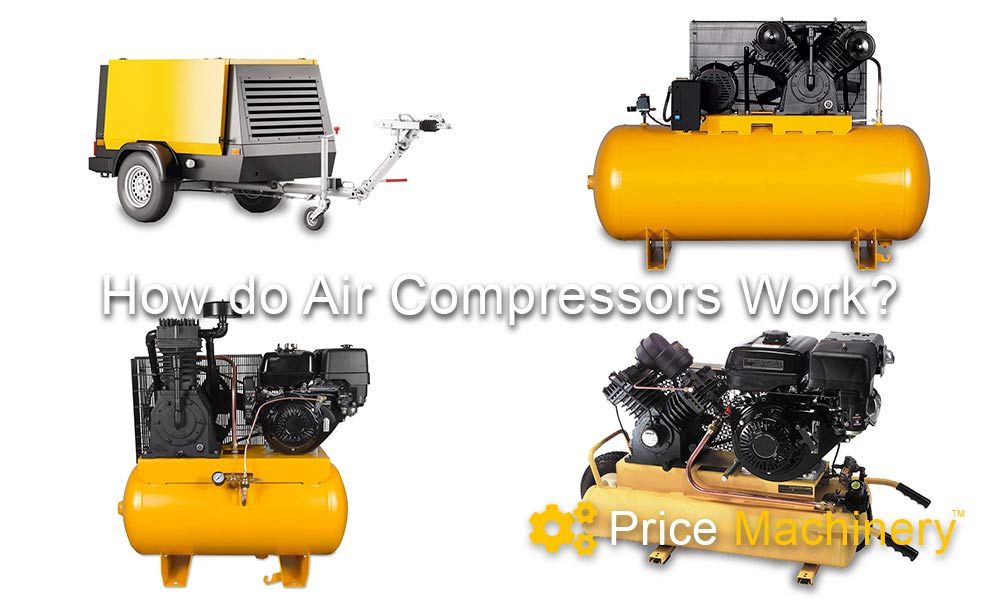 An air compressor pressurizes air using an electric, gas, or diesel engine. It intakes air and forces it into a high-pressure storage tank. As more air enters, the pressure within that tank increases. That compressed air is then delivered via pipes to power a huge array of tools from saws to drills to jackhammers.

We’ll go into more detail about how they work below. You can also watch this helpful video talking about how air compressors work.

How Do Air Compressors Work?

An air compressor is not a substitute for a pneumatic tools and some may be upset to find this when they purchase the cheap tool attachments without a compressor. These tools and compressors must be used together to provide power and get the job done. The most common purpose of an air compressor is to create a high-pressure air source for pneumatic equipment but it can also be used for the air pressure itself to blow items clean.

Are there different types?

The main difference between the two is that a two-stage air compressor has an accelerator pump at the end of the low-pressure chamber that supplies compressed air to equipment through an air hose, whereas a single-stage compressor does not have a separate feed system.

How does dynamic displacement work?

Air compressors use the dynamic displacement method to increase their power output. This method involves taking a large volume of air, compressing it, and releasing it into a smaller space. After being compressed, the air moves with more power due to the higher pressure.

How does positive displacement work?

Positive displacement compressors take a large volume of air, compress it using a piston and cylinder, then remove the compressed air from the cylinder. This method allows for increased pressure despite removing more air than is replacing it.

Is there a difference between a pump and a compressor?

There is a fundamental difference between a pump and a compressor. The differences include;

Air compressors are very useful in a wide variety of industries, from construction to manufacturing.

They are used to power different types of equipment. A small air compressor is usually enough for home or personal use, while large air compressors are necessary for industrial use. When buying an air compressor, look for details such as the maximum pressure and volume tanks that the compressor can hold.

If you’re interested in getting air compressor pricing you can do so here!

Posted in Air Compressors and tagged air compressor, how they work

Click a Machine to Learn More or Find One Near You!